Eight years ago the world collapsed for Esther Klok, owner of top sport horse Diesel. It started when Diesel was in the Dutch team (A-squad single driving), he developed hundreds of lumps within 10 minutes. After a lot of examination by Diesel’s veterinarian, it turned out that Diesel developed an allergy.

“This was a complete nightmare, because horses are not allowed to attend contests whilst on medication. For three years we had ups and downs. Every spring and beginning of the summer the lumps (urticaria) appeared three or four times. 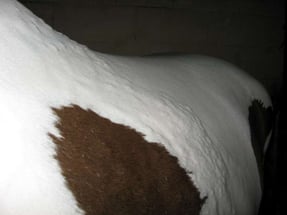 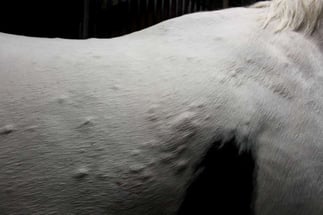 After treating with dexamethasone (corticosteroid), all but thirty lumps slowly disappeared. The thirty lumps that stayed burst open which resulted in a lot of wounds what made lunging impossible. Not particularly handy in the middle of the top-sport season. 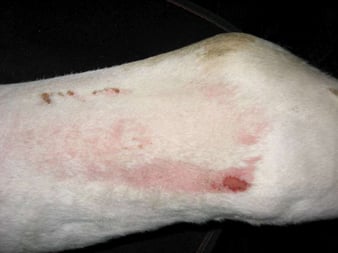 Luckily Diesel’s veterinarian did not gave up. Even after discussions with other specialists who believed allergy testing and immunotherapy have no use in horses, we did an Artuvetrin® Serum Test to see which allergens could be responsible for the lumps. It turned out that Diesel was allergic to several trees among which willow, poplar and ash.

Immunotherapy, which can be used for competition sport, was specially produced for Diesel and in autumn we started the treatment. Next spring, the lumps stayed away! At some point the lumps came back, but after a change in dosage (0.8 ml every three weeks) this was solved.

It went very well until after three years of treatment; the lumps came back again. So we did another Artuvetrin® Serum Test and there were some additional allergens that needed to be included to the immunotherapy: grasses and weeds. After this change, the lumps stayed away again and we are very satisfied with the efficacy of Artuvetrin® Therapy.“

Thanks to Artuvetrin®, Diesel does not allow his allergies to stop him from being a champion:
6x times Dutch champion
3x world championships and the fourth is coming
2x international 3* competitions

Artuvet is dedicated to better health for allergy sufferers by developing and commercializing tools and medication for sustainable relief. We are a trusted partner to veterinarians and pet parents in the fight against allergy. We offer premier test and treatment solutions bundled with unparalleled technical support and customer service. Nobody understands allergy better than us.